YotaPhone is made by Russian smartphone manufacturer Yota Devices. It first made a splash at the 2013 Consumer Electronics Show in Las Vegas and has recently gained great feedback from the 2014 Mobile Web Conference in Barcelona. The 2nd generation YotaPhone is an Android based premium category smartphone, combining a 4.3-inch LCD display on one side and an electronic paper display like an e-reader on the other. The rear e-paper display can receive notifications and display news or maps while conserving battery life.

What do customers think about the concept?

YotaPhone were keen to understand how British, German, US and Chinese users would use their latest mobile design. Due to the unique 2 screen concept, it was important to understand how functionality on the e-reader screen affected the usability of the device as a whole.

Due to the need to speak with 4 different geographic users groups, we recruited 25 people from these areas for 90-minute sessions across 5 days in London. This allowed us enough scope to test the device with all 4 groups to distinguish any cultural differences in the use and perception of the device. User testing focused mainly on the back screen of the phone that was made from an e-ink display. However, we also included more physical elements during testing by asking users to unbox the phone, insert the sim card and turn the device on. Participants would discover the back screen functionality in their own time to understand their initial reaction to the concept. 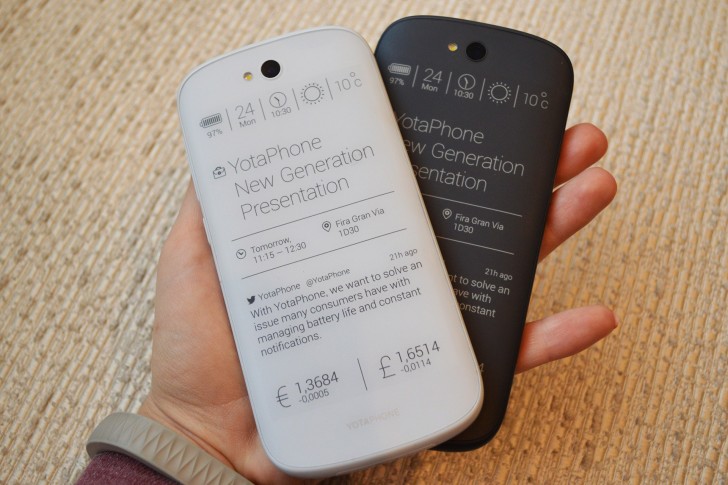 Improving the usability of the phone

The YotaPhone team were quite ambitious with the functionality of this device, making it possible to use every feature of the phone by mirroring the front display. Whilst this idea sounds great in theory in practice it was a different story:

At the end of a full week of testing, we recommended YotaPhone to scale back the functionality on the e-ink display to really make clear to users the benefits of the second screen. We suggested concentrating on key functionality that would aid users with multitasking, and that they should work on making fewer features work perfectly instead of more features behaving poorly.

It was interesting researching a physical product together with its user interface. User testing a device like this was complex for several reasons: