Optimising navigation across desktop and mobile

PizzaExpress is a popular restaurant chain owned by Gondola Group. Founded in 1965 in London, they have since grown to over 400 restaurants across the UK.

PizzaExpress wanted to conduct some usability testing to understand how their current and potential customers navigate their website, and to find areas for optimisation. They were keen to understand where their users would naturally look for information, in order to better facilitate user interaction with the website. 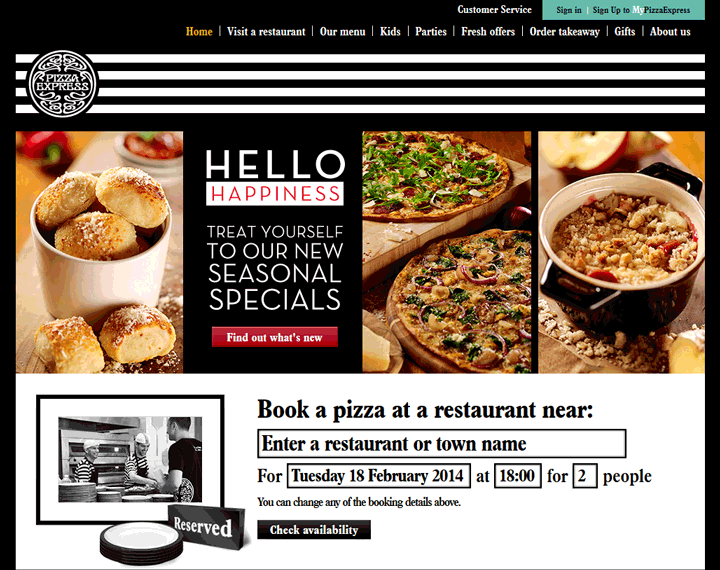 Another objective of this project was to investigate whether there were any specific differences between navigation models on a desktop vs. mobile devices, and between task unique variables (e.g. do people with children find it easier to locate and book a children’s party than those without children?).

We conducted unmoderated user testing with participants split between mobile/tablet and desktop usage. This form of test is a cost-effective method to gather direct feedback from real end-users, and allows us to reach a wider audience of users from across the UK. The testing covered a series of tasks conducted on desktop, mobile and tablet devices: data was recorded about users’ journeys’ to complete the tasks, and they were also given the opportunity to provide open-ended comments on each of the tasks they completed or were unable able to complete, as well as a series of evaluative survey questions and a Net Promoter Score question.

We put together a series of key tasks to test on the site. We selected typical tasks that would be done on the website, such as finding a restaurant number, or booking a table for a specific date. After putting the finishing touches on the user tasks, we recruited suitable participants according to PizzaExpress’ data on their customers (e.g. frequency of eating out). After selecting a remote unmoderated usability testing tool (UserZoom), we elaborated a task list and survey to keep user engagement high whilst trying to reduce drop-outs.

For the desktop part of the study, a total of 151 respondents took part in the study, both habitual PizzaExpress customers and customers who were used to “eating out” at least once a month in other similar restaurants. Participants completed a series of 5 tasks in the desktop version, and users could provide feedback through-out the survey. UserZoom tracked the pages each participants visited, and their order, as well as how long was spent on each page and where they clicked to proceed.

A total of 50 participants took part in the mobile/tablet part of the study, with an even split between iPhone and iPad users.  Most were PizzaExpress customers, and a subset had prior experience booking online on the PizzaExpress website. Participants were pushed to the desktop site to complete three tasks using their mobiles or tablets, as prior analytics data revealed a majority of users accessed the website via the desktop rather than mobile version. 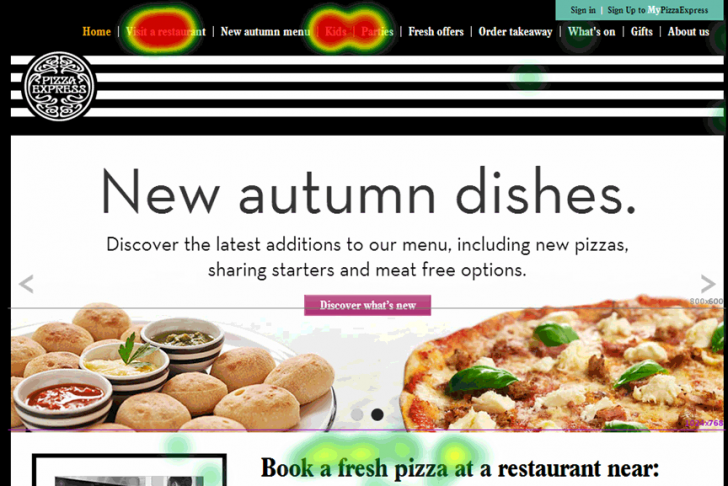 The study ran over a period of a few weeks to allow us to collect enough reliable data on a large enough sample, by distributing the invitation to the survey through a panel company. Once testing was completed we had data on the paths and terms used by participants to complete each task, this included valuable data such as completion times and when participants decided to go back on themselves. Open text fields, and questions helped elaborate on where participants had had issues, or sections which they’d particularly liked. UserZoom also produced a heatmap based off where users had clicked in relation to their position in the task.

The paths taken by users were analysed, and the outliers were removed to help create a clear image as to users’ schemas for navigating through the Pizza Express website, and where they expected information and call to actions to be found.

The study revealed many important facts about how customers use the Pizza Express website, as well as a thought process that goes behind bookings (e.g. having children didn’t make booking a child’s party easier). Several key call to actions were also being missed by participants across all three devices, with important implications for the PizzaExpress website.

Testing led to a series of actionable recommendations, and increased insight into Pizza Express customers. Important areas that affected customer satisfaction and Net Promoter Scores were also identified, and we provided PizzaExpress with some key recommendations to enhance website engagement and use. These findings will feed in to future designs helping Pizza Express help their customers, and optimise engagement with their website.