BDO Stoy Hayward is the award-winning, UK Member Firm of BDO International, the world’s fifth largest accountancy network with more than 620 offices in over 110 countries.

BDO Stoy Hayward came to us with a requirement for an internal application that would allow them to easily present information to employees in the business. The aim of the application was to help employees cross-sell by bringing awareness of products and services within the organisation. Information needed to be organised in several different ways and belonging to multiple sectors and service lines, and needed to be updated by content editors throughout the United Kingdom. 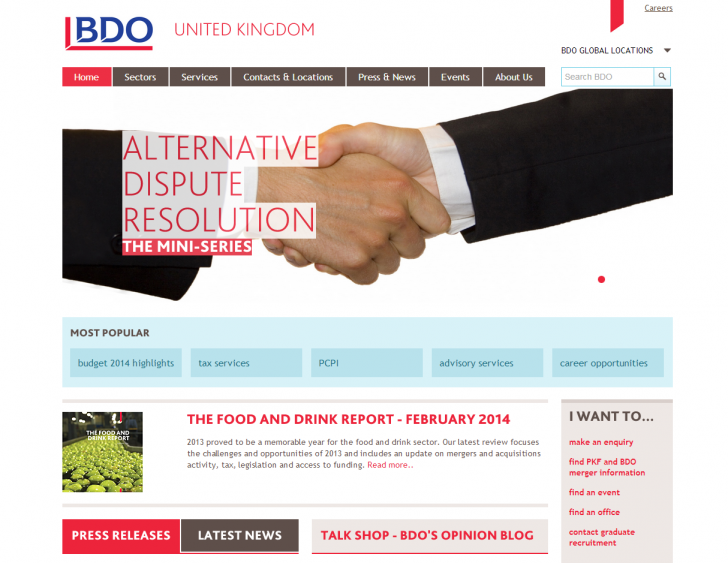 Building a prototype to analyse and organise data

We analysed the information supplied by BDO and reviewed the language and business terminology of the data with the intentions to make improvements where possible. We then wireframed an approach based on organising the data in several ways. Once we had general buy in from the business we developed a clickable HTML prototype and then looked to develop visuals for the key pages within the system. Due to the structure of the data we chose to build a bespoke Content Management System (CMS) so also needed to wireframe the screens for the admin system.

We gathered requirements and produced project documentation and worked with Axure RP Pro to create wireframes and the HTML prototype. The bespoke CMS was written using ASP.Net 2.0 and SQL Server 2005 and the front end uses HTML, CSS and Javascript. The designs were created in Adobe Photoshop.

The site was very well received internally with an internal communications campaign including screensavers, printed adverts, and exposure on the BDO Intranet homepage. There have been a large number of users visiting the site on initial launch and feedback for the most part has been positive.