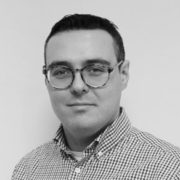 Be it on Twitch, YouTube Gaming, your local gaming bar, or even huge stadiums such as Wembley, there is no doubt that eSports is taking the world by storm. With the eSports market estimated to be worth £740m, and with projections in excess of £2bn, the future is extremely bright for eSports and gaming in general. 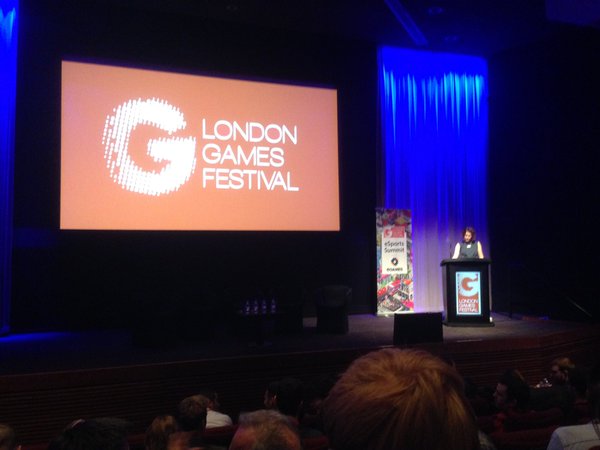 With all of this in mind, a couple of weeks ago I had the good fortune of attending the eSports Summit at the London Games Festival 2016. The event was hosted by BAFTA and took place at their offices near Piccadilly in central London. As expected, the event attracted a huge number of eSports industry professionals and press, all eager to hear the latest news and opinions on the future of this hugely growing industry.

The summit kicked off with Dr. Jo Twist, Head of UKIE (the UK’s trade organisation for Electronic Entertainment), talking us through the massive growth in eSports. We were primed for a couple of big announcements, as well as some really interesting speakers and then the event kicked off. 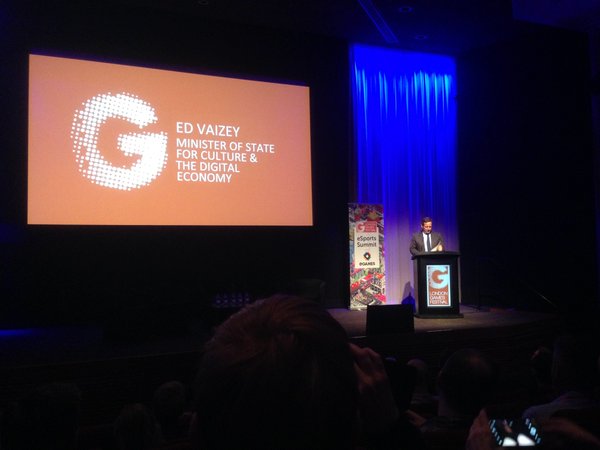 The first speaker of the evening was none other than Ed Vaizey, Minister of State for Culture, Communications and Creative Industries. Ed introduced himself as “your Minister for Games”. Well, I suppose it’s only to be expected that HM Government would want to get down with the cool young folks. His speech came off okay, but there were certainly points in which he seemed to be speaking down to the audience, in that way that only a slightly out of touch government Minister can. That said, it’s absolutely great to see eSports being recognised at that sort of level – and we should welcome the kind of mainstream recognition this represents. Ed did not stick around long after the first few talks. 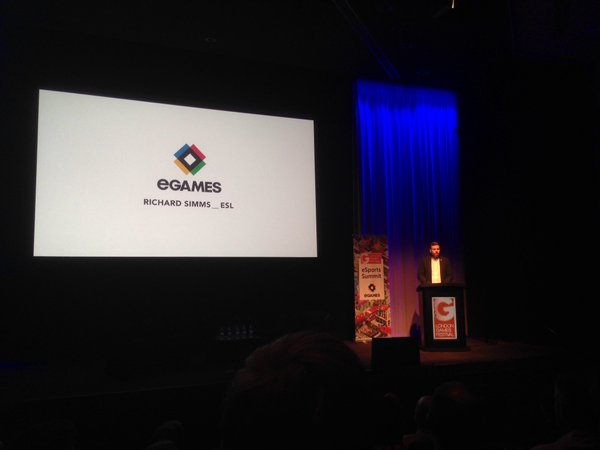 Next up was Richard Simms, an eSports caster (announcer/commentator), who will be familiar to fans of Halo and in particular the Halo Championship Series hosted by ESL. Richard’s role was apparently to officially announce the eGames – a UK Government backed initiative to create the “Olympics of eSports”. The Egames will take place in Rio, Brazil this year to coincide with the Rio Olympics. Teams from the UK, USA, Canada and Brazil are confirmed to be taking part, although entry is apparently open to all countries. Rock Paper Shotgun have a good article on some of the open questions which hang over the eGames still. This message was a little lost in Richard’s sheer and infectious enthusiasm for his own rags to riches story of being in IT tech support less than a year ago, to now eSports casting for a living. These kinds of stories are great to hear in eSports, and promote the attitude that anyone can make it in eSports with the right attitude and luck.

The next speaker was a bit of a pleasant surprise – Adam Gemili, a sprinter who has represented the UK at the Olympics, World Athletics Championships and Commonwealth Games. Adam spoke with great passion about what it means to represent one’s country (in an obvious link to the eGames), and the joy and pride that it can instill in yourself and others. 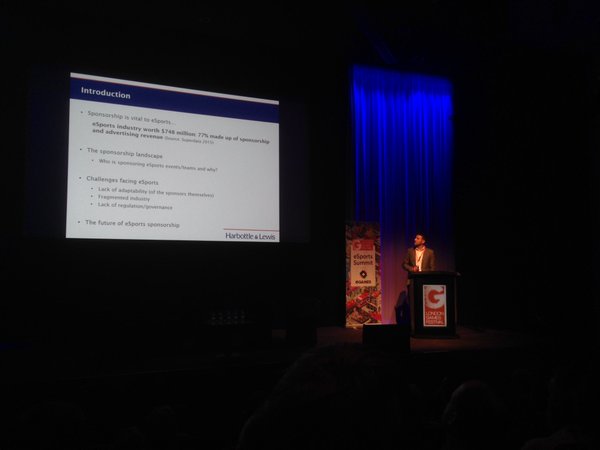 Adam’s talk was followed by a slightly more dry, if no less interesting, talk by Michael Lister – a Senior Law Associate with Harbottle & Lewis specialising in sports law. Michael spoke about some of the challenges and opportunities for eSports in terms of attracting advertising investment from larger, more traditional companies such as car manufacturers, insurance companies and banks. These companies traditionally have huge investments in sports such as Football and Formula 1, and the opportunity for growth is huge in the area of eSports. While eSports is well sponsored by energy drink brands such as Red Bull and Monster, there is a big gap for other companies to fill. Some of the challenges that esports face are a lack of understanding of the medium from more traditional companies, and particularly the still early stage of regulation within the eSports. This includes the possibilities of match fixing, doping etc. While measures are very much in place to minimise this, Michael felt that more could be done to reassure companies. Other potential issues include the lack of a centralised rights holder, lack of annual scheduled events, and fragmentation in the industry. 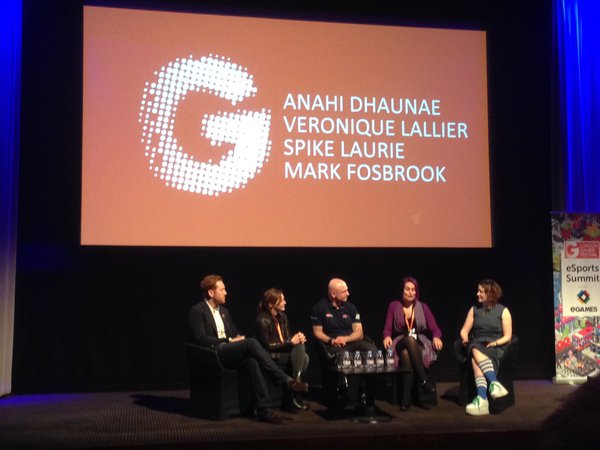 The longest part of the evening was devoted to an open panel discussion on the stage between Dr. Jo Twist (UKIE), Véronique Lallier (Hi-Rez Studios), Mark Fosbrook (Paralympian) Spike Laurie (ESL) and Anahi Dhaunae (former Pro-gamer). The panel covered a vast array of issues within eSports, but I think most interestingly a good portion of the discussion was based around inclusion. Anahi spoke about her experiences as an early pro-gamer, and in particular her experiences as a woman in that situation. Mark spoke his experiences both as a paralympic athlete and as a gamer who needs to use a specialised controller to game. Some of the more inspiring discussion was that, unlike traditional physical sports, eSports allows us to break down the barriers between men and women, abled and disabled, and to all play on a level playing field.

The panel also spoke about the issues around gender in eSports. Currently, half of all gamers are women, yet only a tiny fraction are pro-gamers. The panel asked if enough was being done, especially with eSports as a still heavily male focused area. Anahi spoke about some of the online communities in eSports being toxic to female gamers, and the need for more and better moderation in these communities. 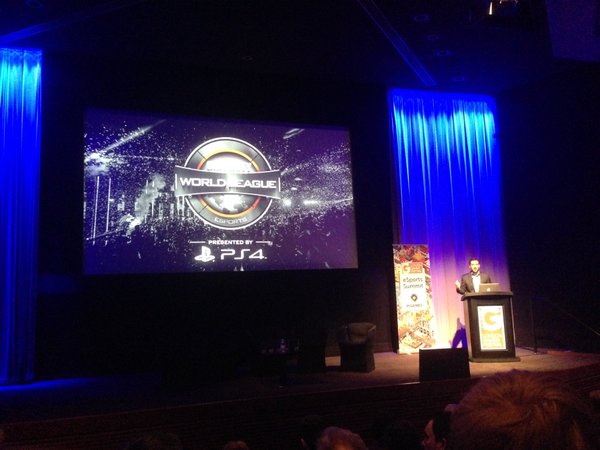 Finally, Lewis Black from Activision came on stage to announce the Call of Duty World League – a new eSports competition for fans of the Call of Duty series of games. As one of the biggest games franchises in the world (particularly on console), CoD is poised to push even more gamers towards eSports in the near future.

Overall it was a great event, well hosted by UKIE and BAFTA. While the event did feel a little self congratulatory at times, and in particular felt like it was organised to promote the UK Government backed eGames, they did a good job overall of representing the overall eSports community. I felt in particular that there was a good balance in terms of male and female speakers, as well as some strong opinion on how to get women more involved in the eSports space. This is all positive, as points to a positive future for eSports moving into the next few years.