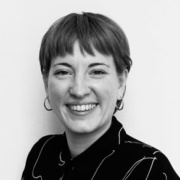 Service designer. I love imagining what doesn't yet exist.

I’m writing to you from the future. It’s the year 2094 and at Spotless we’re working with humanity-centered systems thinking while growing our own vegetables for lunch. The new office favorite is chicken-flavored tomatoes.. with hot sauce, of course.

At least that’s one of many possible futures that I was privileged to explore at this year’s Service Design Fringe Festival. I’ll come back to those tomatoes a little later.

First, I want to elaborate on my privilege. I’m a young, healthy, white woman working with Service Design in London. I grew up in Denmark, the country named one of the happiest several years in a row. I was able to choose the education I wanted and after I finished my Master’s degree, I got a chance to work at Spotless. My home has never been flooded and I’ve always had enough money to buy food and pay my bills. If times were tough, I had a social security system or a family, that could provide care and support.

Yet, what attracted me to human-centered design, was solving problems for underprivileged people. People that end up in unfortunate, unfair and vulnerable situations.

Lauren Currie, Managing Director of NOBL, brought some of these issues to our attention in her to-the-point opening speech:

“Service Designers aren’t embracing the discomfort that comes with accepting our whiteness and our privilege. We’re guilty of serving the status quo, rather than challenging it. And we’re preaching to the choir, instead of reaching new audiences.”

As one person in the audience pointed out; design does come with a side of arrogance.

This year’s theme was ‘Design in times of uncertainty’. And as most of the presenters noted; right now is a very uncertain time to be a designer. We’re facing environmental, social and political challenges that can only be characterized as wicked. Lucky for us, it’s also an exciting time. The issues we’re facing require us to unite, rethink our approach and reframe how we measure success.

I have extracted five themes from this year’s festival that I will go into a bit of detail with – accompanied by some great examples from the speakers.

Buckle up; We’re going to jump to the past, reflect on the present and dwell on the future. 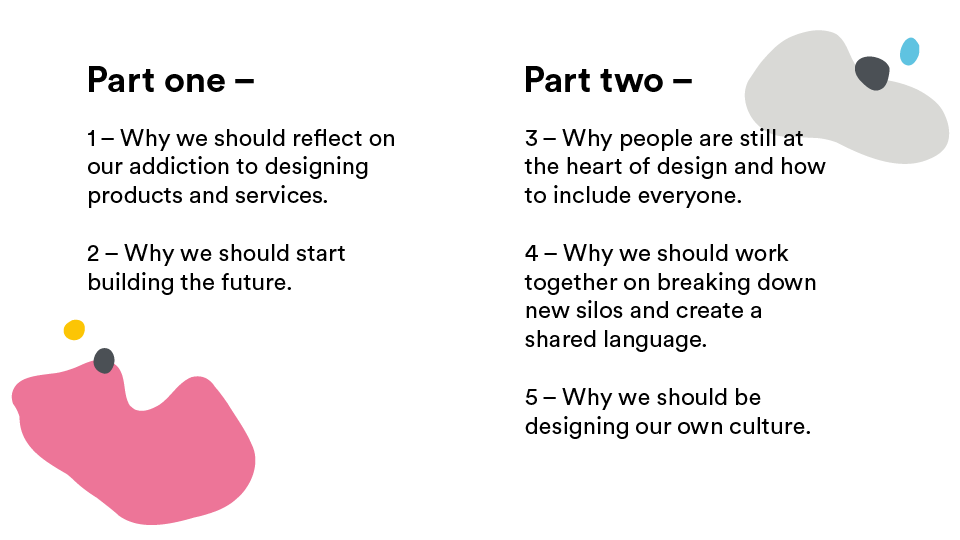 When is the last time you’ve stopped to think about the unintended consequences of what you’re designing? Have you ever wondered if the products and services you’re building are really addressing the actual problem?

It’s time we shift our mindset from focusing on short-term profit to long-term value for the planet and its people. And if we’re in the consulting business, we should inspire and empower our clients to do the same.

How one woman broke a circle of violence, by re-framing the problem

Cat Drew, Chief Design Officer at Design Council reminded us how important it is to spend the majority of our waking hours understanding and framing the problem.

Exhibit A: Back in 2004, Karyn McCluskey, a former nurse turned police officer was assigned to investigate how to reduce Glasgow’s violence. At the time there was a facial injury every six hours. Instead of rushing to a solution, Karyn McCluskey spent time framing the problem.

– Karyn McCluskey on the violence in Glasgow in 2004

By changing perspective and bringing her previous experience as a nurse into play, she managed to approach the problem in a new way; as a disease that could be prevented. Based on her findings, a violence reduction unit was formed to investigate how people ‘caught’ the disease.

The unit went on to talk to parents, teachers, social workers and even dentists (because violent men had a tendency to hit their girlfriends, and the dentist was the first to see the evidence). 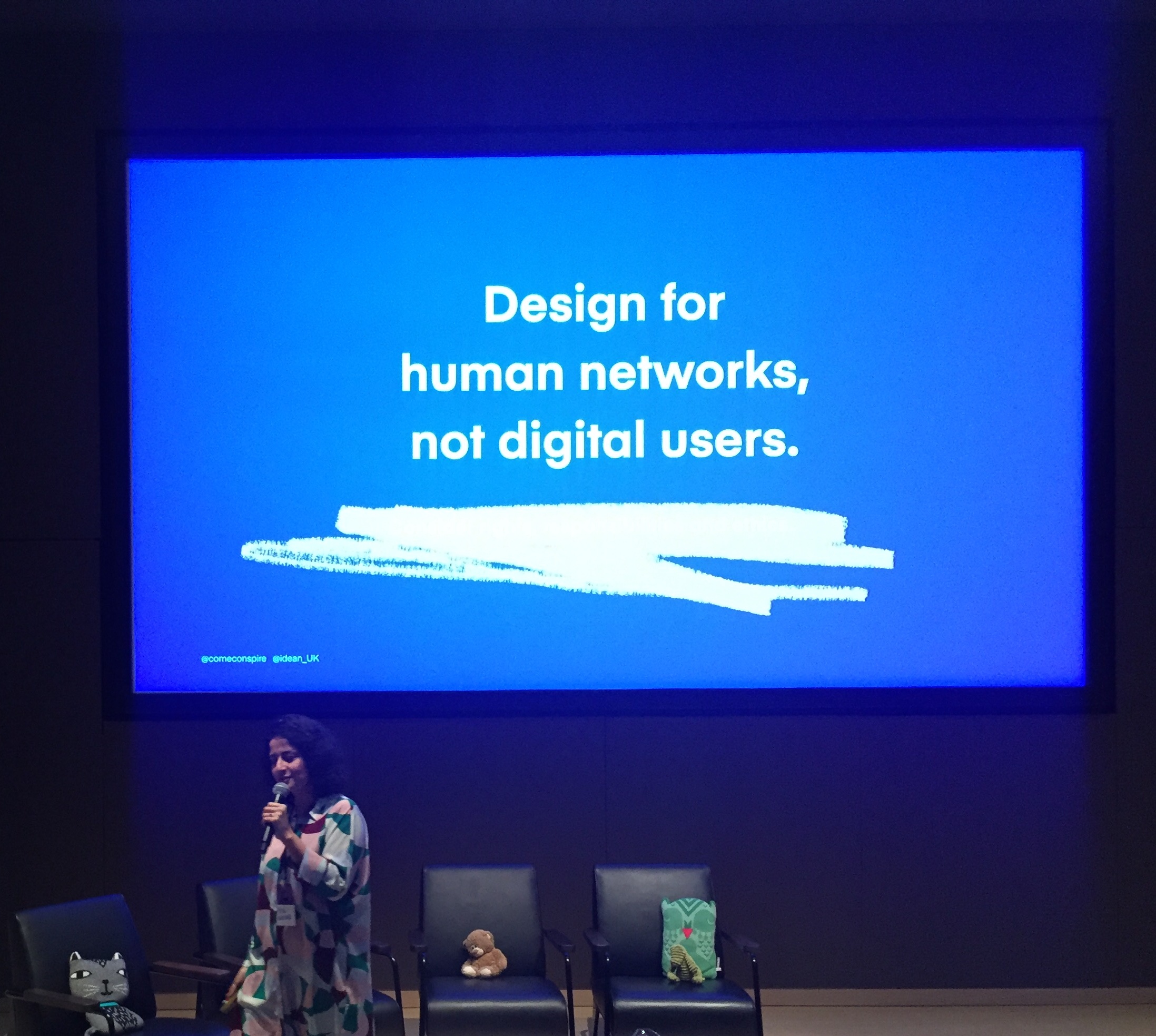 This story underpins that systems thinking is necessary when tackling today’s problems. Mapping out the invisible and translating complex human behavior into simple visualizations can help us understand the system. Payal Wadhwa, Service Design Principal from Idean summarized this in one sentence: Design for human networks, not digital users.

Karyn McCluskey is also a great example of the fact that creative ideas can come from anyone. Creating a culture in which creativity thrives, ideas are tested and failures are celebrated as ‘possibilities to learn’ should not be exclusive to the design community.

For service designers, that means realizing that we’re not going to save the world alone, one blueprint at a time. We should acknowledge that we’re part of a huge system. We should learn how to pass on our real superpower of empowering others to make informed decisions. And, as Payal Wadhwa stressed; we should find better problems to solve.

What if we started finding problems instead of solving them?

2 – Why we should start building the future

If we shouldn’t design products and services anymore, what should we then design? Prototypes! Especially the ones that explore possible futures and reveals something about our present. Sometimes we get caught in trying to predict the future, but what would happen if we started to build it instead?

“[…] designers spend a vast amount of time and energy tinkering around the edges, making beautiful plans that rarely get implemented all whilst sitting safely in our comfort zone.

The future of food: The good, the bad and the mono meal

In many ways, I felt Method was the stars of the show on Thursday’s festival. I honestly enjoyed all the talks and workshops I attended, but I did feel a special atmosphere of curiousness and delightfulness from the audience during this talk.

I have an idea as to why. First of all, Ana Soto and James Steiner were humble. Second, they were there to tell a story. A cool one, from the future. And last, but not least, they seemed to pull a rabbit out of thin air. Cool, hi-fidelity prototypes (or provotypes). In many ways, it was like watching an episode of Black Mirror.

They stated a great example of what Lauren Currie had encouraged us to do: To consult less and build and make more.

The project explored three possible futures through speculative design by combining macro trends and agriculture trends. They had built out their provocative concepts and exhibited them at the Barbican Centre where ‘people from the future’ would roleplay and interact with the audience. 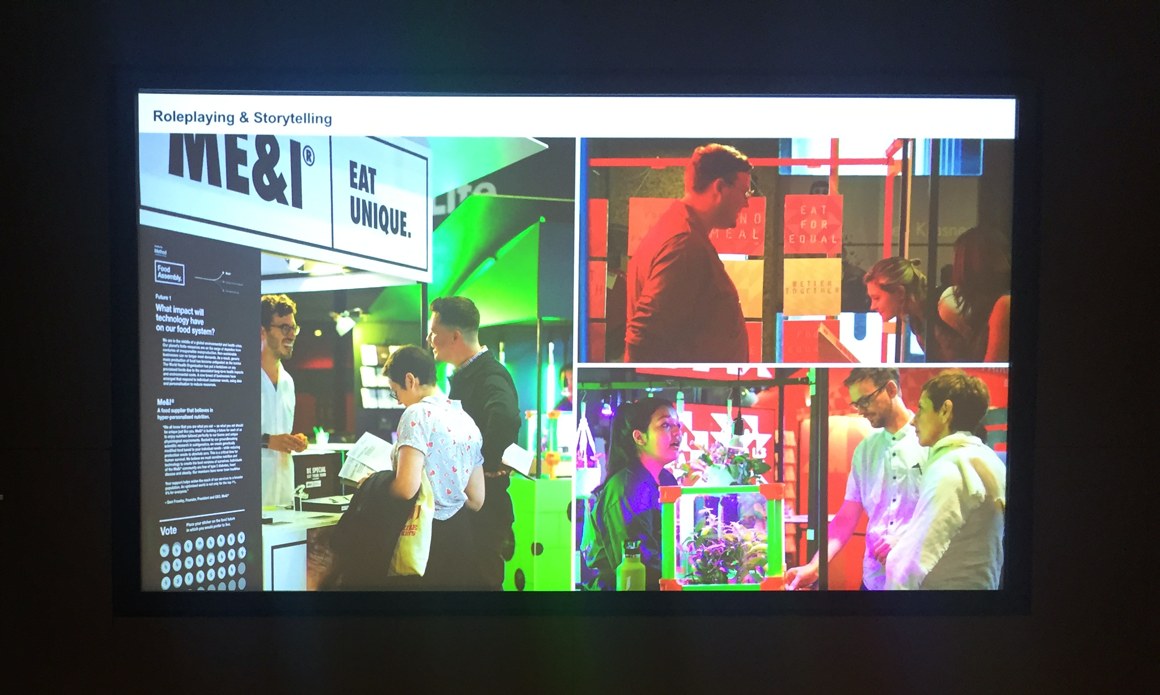 Method showed us three possible scenarios for the future of food

Building a human approach to policymaking

Another example of building the future came from Benjamin Lyons-Grose, Head of Service Design & UX at Methods. Ever wondered what happens when we die? His team spent most of their time the past year dealing with death. More specifically, the process for death certification to inform policymakers. Their brief was to design a service for the NHS that was so good, that people wanted to use it before they had to.

“Existing arrangements for death certification are confusing, provide inadequate safeguards, and there is no mechanism that allows the NHS to see patterns, take action and learn from them.”
– Department for Health and Social Care

How do you digitize something that doesn’t exist? And isn’t yet the law. You start building it. At Methods they spent a lot of time in the mortuary (conducting research). They visualized everything so they could share it with others outside their core team. And to help them imagine how death would look like in 2025, they sketched out possible newspaper front pages.

The project is a unique example of designers inventing the future and creating a practice. Through research insights and design tools, the policy is being built around the needs of citizens instead of the constraints of bureaucracies.

Thank you for reading part one of my insights from the SDFF. Stay tuned. Part two is coming in a little less uncertain and not-so-distant future.