I was lucky enough to attend the 9th annual Service Design Global Conference in the Netherlands from the 26th – 28th October 2016 with one of our Lead Service Designers, Ine Vassøy, and I have captured my highlights from this event. This was a well run conference with a truly international audience.  This really is the kind of event that showcases the types of Service Design projects we like to be a part of here at Spotless.

As always with conferences that have multiple tracks/workshops, there are only so many sessions you can see on the day.  You simply cannot be in two places at once.  Putting aside any ‘Fear Of Missing Out’ (FOMO), I have made references to the sessions I attended or that struck a particular chord for me.   I opted for the presentations rather than the workshop format and on reflection a mixture of the two might have been better as some presentations were back to back over the course of two hours with no break in between. 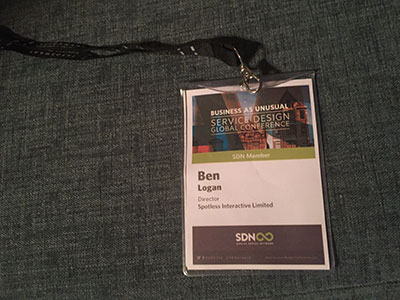 Service Design as an established practice


The tone from the event was one of a more established practice and discipline that has gained confidence over the recent years, rather than a more exploratory and under confident tone from previous years. This can only be a good thing for the industry as the discipline matures.  There was some interesting debate on one of the panels over the difference between ‘Service Design’ and ‘Design Thinking’ – Whilst considered close relations they are seen to be slightly different.

The opening keynote from Holger Hampf at BMW was thought provoking and revealed the transformation car manufacturers are needing to consider as they move from a product to a service orientated mindset. As cars become more autonomous, there is less emphasis on the driving experience and more on the services that surround this. A car will become more like a second living room with very different seating arrangements and a greater focus on entertainment. This made me think about the various future applications of this second living room with Holograms, TVs, instant access to games, interactive family work spaces and maybe even a fridge in the back to keep everyone happy!

Don’t talk about cultural change, do it

This may not have been the exact phrase used by a speaker from Deutsche Telekom (they also won one of the SDN awards), but it captures the essence of what he was referring to when re-inventing from within an organisation. This essentially means that you need to build trust through doing, using success on smaller wins within the organisations you work with/in. This will be a platform into further work and projects if delivered well. The success of the project can be used as a conversation starter with other contacts within the organisation. The key is to do ‘something’ e.g. Not keep evangelising as an academic concept but build evidence through delivery.  This reminded me of a phrase my old boss used to say in the early 2000’s ‘Start small, think big, scale up’.

Martin Dowson from Lloyds Banking Group did an excellent talk on Building Service Design teams In-House and the way we need to adjust our language and align our activities to internal initiatives. There seemed to be a lot of talks on this topic, but this might have been slightly biased by the fact that a lot of speakers were from In-House teams at large financial organisations. There is a clear opportunity for external agencies and consultancies around upskilling client teams and building capabilities as well as discrete projects to complement the activities of In-House teams. 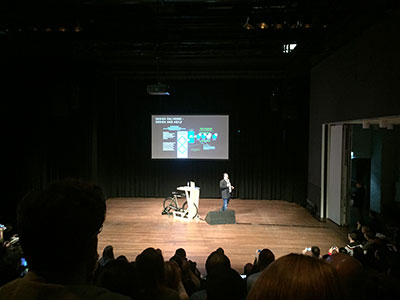 We still like to talk in riddles with cryptic language and further work is required to simplify the language we use as practitioners. ‘Equal partner’ instead of ‘Stakeholder’ was used several times and this was adopted by other speakers during their presentations and seemed to stick. ‘Service Safari’ was seen as a potentially bad choice of phrase in a question asked on Members Day. Phrases like ‘Ethnography’ whilst common within day to day practitioner vocabulary, are still not very accessible, and we need to do more to demystify these activities for our clients and partners.

Admittedly I did not get to all the Agile and Service Design talks but no one that I saw convinced me that Service Design and Agile working together has been fully addressed. Jamin Hegeman formerly of Adaptive Path and now at Capital One hinted at this in his talk on members day. Katie Koch from Spotify also talked around how Agile and Lean have totally different goals to Service Design. 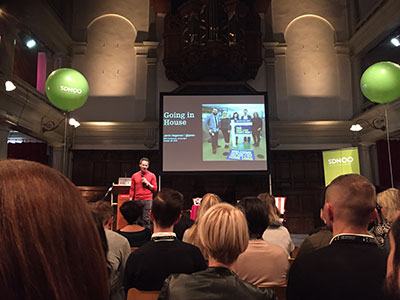 Linked to the point above around Agile, we heard from several large companies such as Spotify and Google who are engineer driven. Katie Koch from Spotify mentioned that there is often not time to take full cross functional teams out of their development projects to work on new initiatives. Data needs to remain raw in software driving organisations e.g. Customer Journey Maps need to remain low fidelity to get the developers on board and in fast paced Agile organisations the beautifully Crafted Journey Map would be out of date by the time it’s printed. This seemed to be in contrast to the excellent talk from Oliver King from Engine who in his talk on ‘Design-led change’ referred to the detail and rigor required in the deliverable giving client’s a better experience.

Implementation of projects needs planning at a deeper organisational level

There was a great talk by Jess McMullan from Situ Strategy who has developed a number of Frameworks to think about the organisation on a deeper level e.g. Cultural, economic environment, stakeholder landscape and stakeholder mapping. This reminded me of methods used previously in exploration around ‘Socio-Technical Systems’ and ‘Systems Thinking’ and seemed to be a really useful extension of this thinking.

The UK Government Digital Service has been instrumental in pushing the craft of Service Design at the highest policy level, and is a blueprint that other countries have since followed.  There was some great talks from Cat Drew at Policy Lab UK, who talked through some of her projects. Whilst not exactly part of GDS, the work they have been doing is inspirational in terms of having real impact to the public sector.  What was clear is that UK government needs evidence in numbers e.g. not only qualitative research findings, but combining this with quantitative data. This was echoed by Erin Muntzart from Google, who use initial data sets to build the business case and the hypothesis to explore topics in more depth using qualitative techniques. This was referred to within Google as ‘Groundwork’.

Closure experiences and the end of life

A super thought provoking talk entitled ‘Death, denial and debt’ from Joe Macleod focused on the amount of effort, or lack of effort, that goes into the planning of the end of a service.  We are all guilty of spending a lot of time onboarding people into a service, and growing the user base of the service, but little time or thought is put into making it super easy for people to leave or end a service.  Examples included switching bank accounts or broadband providers.  One example in another talk focused on companies including Sky, who make customers go through a 60-90 minute exit interview, before allowing the customer to leave the service.  There should be a much easier way to leave rather than going through this aggressive sales saloon. He also touched on interesting business models such as credit cards e.g. we are never rewarded for paying off credit cards or mortgages. Why don’t we have a party at the end of paying off a mortgage paid for by the mortgage lender? Instead we get an uninspiring letter at the end of 30 years of re-payments. We have a culture that rewards excess rather than repayments.

Dominic Wilcox – The search for ideas, inspiration and delight

A genuinely moving and inspirational closing Keynote from Dominic Wilcox called ‘The search for ideas, inspiration and delight’, showcased an insight into Dominic’s playful world and how he gets inspiration in the everyday. I hope this is recorded and uploaded online by SDN as it really was an excellent talk.  Dominic Wilcox returned to his home town of Sunderland to ask over 450 children across the city and in nearby South Tyneside to draw their own invention ideas. He then asked local makers and manufacturers to make a selection of them into real things. Activities like this really build and inspire the next generation of makers and designers.  Go check it out – http://inventorsproject.co.uk/ 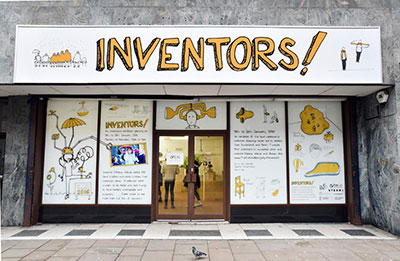 Thoughts on the conference?

Did you attend the conference also? We’d welcome any feedback and thoughts and if there were particular sessions you found more useful than others.